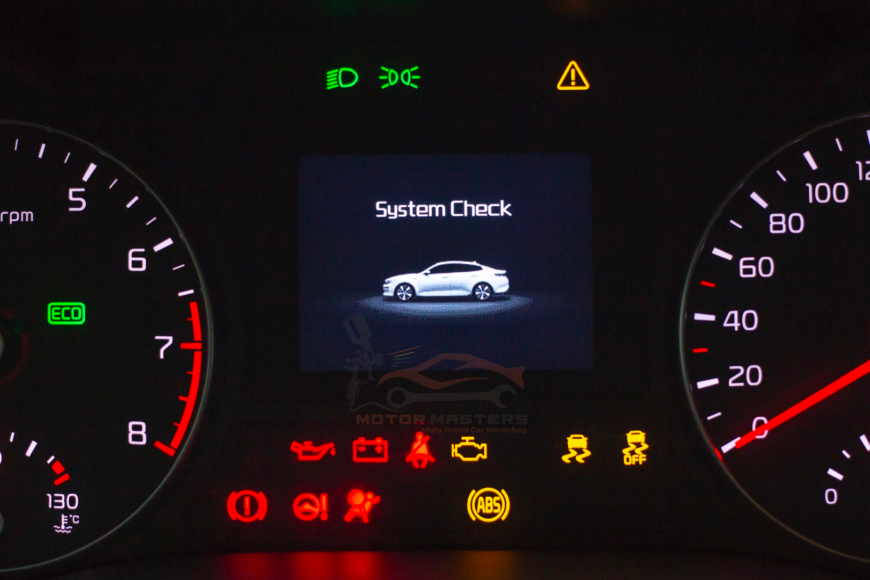 What do your car dashboard warning lights mean?

We’ve all been there: You’re driving along the freeway, enjoying the views, and all of a sudden, you hear a beep—you look down, and a symbol appears on your dashboard. You start to wonder what could be wrong.

The lights can be split into three categories. Red usually means serious problems, orange or yellow is advisory and blue or green cover everything else. Generally speaking, whether it’s a single light, or your dashboard is lit up like a cul-de-sac at Christmas, you should address the issue swiftly. That’s why we’re breaking down your dashboard, symbol by symbol.

This is a general guide to dashboard warning lights and what they mean. For more detail, you may need to consult your car’s handbook.

A red warning light in the shape of a square car battery showing positive and negative terminals indicates an issue with charging the battery. If it is your battery, occasionally you’ll notice that your clock is fading or your headlights are dimming. If you wait too long, your vehicle can completely conk out. This is what has happened when you see fellow drivers “jumping” each other’s cars.

This could be a problem with the battery itself, or the alternator or alternator belt.

This brake system warning light also requires urgent attention. It may be that you’ve left the handbrake engaged slightly while pulling away, so ensure it’s fully released – some cars may instead have the letter ‘P’ instead of an exclamation mark to represent that the parking brake is on. If this doesn’t solve the problem, or the warning light appears as you’re driving along, pull over safely and call for roadside assistance or arrange for the car to be taken to a garage. It may be that the brake fluid level is too low and simply needs topping up, or that a brake pad wear sensor is faulty. However, it could also be a more serious issue with the braking system. While you can’t take the risk either way, if the pedal feels spongy when you press it, or sinks all the way to the floor, then it’s easy to tell that a significant issue has occurred and the car should definitely not be driven any further.

A light that looks like an oil can signifies low oil pressure. You should not drive with this light illuminated as it may cause damage to the engine. This old fashioned oil can image indicates that there is an issue with your car’s oil pressure system. Either you’re running low on oil or your oil pump isn’t circulating enough fluid to properly lubricate the surfaces inside your vehicle. This should be addressed as soon as possible, as your engine can wear quickly without proper lubrication.

Turn the engine off and check the oil level using the dipstick – it may need topping up. Seek assistance from us by scheduling a visit if the light stays on.

A light showing a person sitting with a seat belt across their chest is warning you that someone in the car is not wearing their seat belt. These days, the vast majority of new cars come with a system to let you know if any of your passengers haven’t got their seatbelts fastened. There’ll usually be a light – as above – to tell you if this is the case. Cars use pressure sensors in the seats and sensors in the seatbelts – so if there’s a certain amount of weight on a seat and the seatbelt isn’t secured, it’ll let you know. These warnings may be accompanied by a noise, too.

This one is pretty self-explanatory. If you see the light on at any time after start-up, then the engine is running too hot or there isn’t enough coolant in the system. This may be due to a number of issues, all of which could leave you stranded in a cloud of steam. It could be that the car’s radiator is leaky, clogged or broken – you’ll likely see coolant dripping out if this is the case. It could also be due to a faulty water pump. More serious is a blown head gasket, which can signal catastrophic failure if you don’t turn off the engine immediately. Some cars may also have another one of these lights but blue. This light means that your engine is cold, so it should appear when you are starting your car after it has been sat for a while. The blue light isn’t one to worry about but it’s advisable not to push your engine too hard until it has disappeared.

Like the oil pressure warning light, you should stop and turn off the car’s engine to prevent further damage.

A light showing a person with a circle in front of them suggests there’s a fault with one of the car’s airbags. Investigate it as soon as convenient.

If you see this light while driving, pull over safely and make sure the relevant door is closed. Like the seatbelt light, these lights don’t usually mean that there’s anything physically wrong with the car (unless the sensor that sends the signal to the light is itself faulty). Instead, they tell you that one of the openings – be it a door, boot or bonnet – is open.

We’re now moving onto orange or yellow lights, which signify advice rather than urgent issues.

A shortage of washer fluid can trigger a warning light on some cars. Simply top up the washer fluid reservoir to turn the light off.

You’ll most commonly see your car’s traction-control warning light when the wheels lose grip, usually in the rain or snow. It gives a visual indication that you’re close to the limit of grip. If it’s on constantly, it usually means it’s deactivated – either by a fault or by you switching the system off. If it’s the former, you’ll need to get the system checked, if it’s the latter, you should switch the system back on.

Driving more cautiously with the conditions in mind will prevent it appearing again.

The ABS light is likely to come on during hard braking. This is when the anti-lock braking system is triggered. Essentially, during heavy braking the system will modulate the brakes to prevent the wheels locking up and causing a skid.

As with traction control, if this kicks in on the road, adapt your driving to prevent it. Keep in mind, every time you turn on your vehicle, the system does a self-check, and may light up for just a few seconds. If it goes away immediately, your system is in working order.

The engine management or ‘check engine’ light could mean a wide range of things, from an open fuel filler cap to a serious engine problem. You’ll need to plug a diagnostics reader into your car to establish exactly what the issue is.

If this light appears, it’s wise to pull over and check your gas cap and other systems in your vehicle. If it’s flashing, you should definitely stop driving! In most vehicles, a flashing check engine light signals that you have a serious problem that could cause serious damage if ignored.

If you car is fitted with a TPMS (Tyre Pressure Monitoring System), you may see this light when one or more of the tyres is under-inflated – possibly due to a puncture.

An under-inflated tyre will wear more quickly, lead to higher fuel consumption and cause the steering to feel sluggish. It may also make the car dangerous to drive.

If the TPMS light flashes for a minute or so when you start the car and then stays on, this means the system isn’t working properly. Get it checked at a garage as soon as you can.

A catalytic convertor uses chemical reactions to break down harmful gases in your car’s exhaust. This light means it is overheating or not functioning correctly.

You can continue driving with this light illuminated, but you should have the issue investigated promptly – or risk further damage to the ‘cat’ (and a potentially bigger bill).

The exact appearance of this warning light may vary, but it’s there to warn you that your car is due a service.

The service schedule will be detailed in the handbook, and you should follow it closely to keep your car safe and preserve its future value. Many modern cars will actually give you a mileage countdown until the service is due.

If your car is fitted with lane assist – to nudge you back into lane if your car starts to drift on the motorway – a light might display to show it’s enabled.

If your car is fitted with cruise control, a light showing a car’s speedo with an arrow pointing at it might display when the system is turned on.

If you drive a diesel car, a glow plug light might display when you first turn the key. This means the glow plugs are warming up and the ignition shouldn’t be turned on until the light goes out.

If the light flashes, it suggests a problem with the glow plugs.

Some cars will display a warning light when they detect a failed bulb in one of the lights. Replace the bulb to extinguish the light.

If you drive a modern diesel car, it might display a DPF light when the diesel particulate filter becomes blocked.

This is most likely to happen if you do lots of short journeys at low speeds. Allow it to regenerate by driving on a long motorway journey.

When you turn your indicators or hazard lights on, left or right arrows will display on the dash to show which way you’re indicating.

When you’ve got main beam engaged for driving in the dark, a blue light like the one in the picture above will display on your dashboard.

You should make sure you dip your headlights when there are other cars about to prevent oncoming drivers being blinded.

A curved ‘D’ shape next to wavy lines will indicate that your front or rear fog lights are turned on. These should only be used when visibility drops below 100 metres.

An exclamation mark below a curved arrow relates to the car’s stop/start system. Depending on the car, it could mean that the system is turned on, allowing the engine to turn off when the car is stopped to save fuel, or simply turned off.

It could also mean there’s an issue with the stop/start – consult your owner’s manual if unsure.

Feel Free to Email Us at
contact@motormasters.in